Showing posts from January, 2011
Show All

January 30, 2011
The first sections of the model railway have been fixed to the back wall, the panels have a lot on them besides the track - buildings, people animals - there is so much to see. Most of the panels for the new platform in Newmans Sidings are in place, its hoped to have this completed by the start of the season in March. Pullman Coach Gresley is in the shed having a makeover. S&T and P/Way have been working hard at Nunnery installing new signalling and sleepers.
Post a comment
Read more 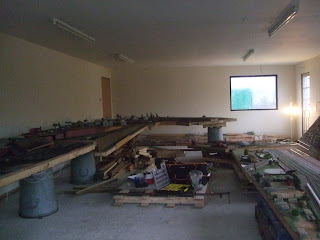 Today saw a gang of willing workers get all the large baseboards into the new shed. They have been put roughly into position on dustbins and pallets, ready for the legs to be fitted and the first boards fixed to the back wall. Hopefully it will all fit together nicely but there may have to be a bit of tweaking here and there to get it to fit. At the same time the electrician was busy installing the rest of the ceiling lights and more sockets, and this afternoon the power was connected.
1 comment
Read more 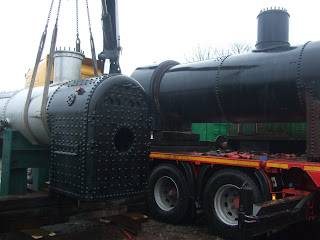 This morning the boiler for Andrew Barclay 2199 'Victory' came back after having essential work carried out by Mervyn Mayes at Dereham, Norfolk. Hopefully this loco, now in private ownership, will be back in steam later this year. further details can be found on http://www.victory2199.webs.com/ The lorry then took away the boiler for WD190 which is also going to Mayes for work.
Post a comment
Read more 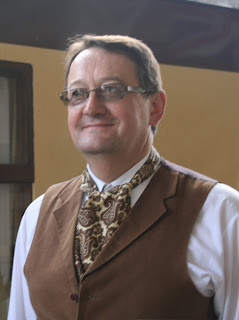 Another year gone and what a busy one it was - changes took place around the site including re-building one end of Aquila, getting a new toilet block and demolishing the old one, new fencing around the site, new steps at Nunnery signal box, improving the level crossing - all of which were helped by the Railway being awarded Liferaft Trust funding. The footbridge is also due to have steps replaced soon. Two of the main highlights of 2010 were obtaining VAQAS Accreditation - this is the Visit Britain Visitor Attraction Quality Assurance Scheme which means we can display the red rose. We were then voted Best Small Visitor Attraction in Essex. October saw the 25th Victorian Schools Special, this event remains as popular as ever with schools already booked for the 2011 event. The Santa Specials ran well until the 19th December - so much snow and unsafe conditions meant we had to cancel the days trains. An extra day on the 23rd helped accommodate passengers booked for the 19th. On a s
Post a comment
Read more
More posts